Built-In Keys provide a lot of useful information on your report at a glance. The Built-In keys are found in the Key Browser.  Expand the Built-In folder and you'll see all the default keys, including a Report folder.  The keys in the Report folder are specifically related to the report: Gateway name that the report is located in, report name, folder path to the report, and the Timestamp of the Gateway.  The other Data Keys are related to information you may want to add to a report like the date you are viewing or printing the report, page number, number of total pages, and more.

Here is an example of all the available Built-In keys that can be used on a report. 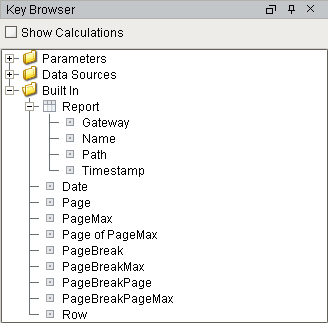 The Built-In Report Data Keys and Built-in Data Keys are included by default in the Report Module. The tables below identify the default Built-in Keys along with a brief description of each key.

Using the Built-in Data Keys is easy. In your Design Panel, simply drag any of the data keys anywhere on to your report. Move them around until you find the best location. Built-In Data Keys can be used in the header and footers if appropriate. In the report example below, several Built-In Data Keys were used.

An aggregate calculation will result in null if any of the individual values are null (rather than return a value that is technically incorrect). You can work around this by implementing a derived method that returns a default value if the original attribute is null and aggregating using that key/method. Also, most of the aggregates contain a second version ("total2") that assume that null is equal to zero.

The "count" and "countDeep" Keys

The count keys tell us how many objects are in a given list or group. This is most commonly used for tables with one or more levels of grouping. If, for instance, you have a table of Movies grouped by their studio and you add the @count@ key to the studio details, it will display the number of movies for each studio. So it might make sense to have a text field with "@studio.name@ has released @count@ movies" (Warner Brothers has released 15 movies).

The count key only counts the next level of grouping. If you have multiple levels of grouping and want to count all the root entities use the countDeep key. Suppose you have movies grouped by their category and their studio, and want to display a top level summary. You could use: "@studio.name@ has released @countDeep@ movies in @count@ different categories" (Warner Brothers has released 36 movies in 7 categories).

There is an additional set of keys in the Attributes Browser which are used to access upper level groups: Up, Running, Remaining. @Up.count@ would tell us how many objects are in the current level of grouping.

By doing some simple arithmetic and using the "Up" key, we can calculate a percentage total: "% Total: @revenue/Up.total.revenue@"

The running key references a virtual array containing all of the objects processed thus far in a lower level grouping. This is useful to get a running total. For example, in a ledger: "Credit/Debit: @amount@ Current balance: @Running.total.amount@"

The remaining key is conceptually the same, but results in a virtual array of remaining objects.For example: "Credit/Debit: @amount@ Remaining Activity: @Remaining.total.amount@"

Dynamic Data Keys allow you to make changes to a report allowing you to tailor a report to a specific need or requirement at a given time. You can bind properties on Reporting components to parameters. It's as simple as dragging-and-dropping the parameter to the property, or right clicking the property and clicking on 'Use dynamic data key'. 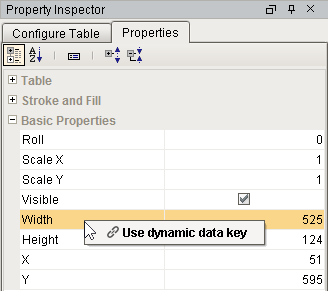 This feature is new in Ignition version 7.9.1
Click here to check out the other new features
Date Format and Number Format properties now accept Dynamic Data Keys. String values should be used to for these properties, such as "#0.00##" for number format.