The Gateway Network allows you to connect multiple Gateways together over a wide area network, and opens up many distributed features between Gateways.

The Enterprise Administration Module (EAM) uses the Gateway Network for message and file transfer, and can monitor network connections for availability. The EAM reports whenever communications are lost via alarm events and system Tags.

Security Zones can be set up to lock down or prevent access to certain parts of Gateways within the Gateway Network.

When using the Gateway Network, you will be working with two type of connections.

Every machine on the Gateway Network is known as a Server. When you establish a connection to a remote machine, the remote Server sends data about itself and also sends data about any other Servers known to that machine. For example, assume your local machine is GatewayA. The remote machine is known as GatewayB. GatewayB also knows about another remote machine named GatewayC. As soon as your local GatewayA establishes a connection with GatewayB, GatewayB also sends information about the existence of GatewayC.

Modules such as the Enterprise Administration Module (EAM) are aware of this relationship and allow communication between GatewayA and GatewayC, even though there is no direct connection from the local machine to GatewayC.

If you are cloning Gateways to then be connected via Gateway Network, it is important to notice that there is a Gateway unique identifier in %IgnitionInstallationDirectory%/data/.uuid. No two Gateways connected via Gateway Network should share a .uuid. Generally, Gateways are cloned by restoring the same Gateway backup on multiple servers. Since Gateway backups carry their .uuid with them, restoring the same Gateway on multiple servers will result in multiple Gateways having the same .uuid. To get around this, you must stop your Ignition service, delete  %IgnitionInstallationDirectory%/data/.uuid, then start your Ignition service so that a new, unique .uuid is generated. Doing this before connecting two cloned Gateways will prevent any .uuid collisions.

Which Server Should I Configure the Outgoing Connection On? 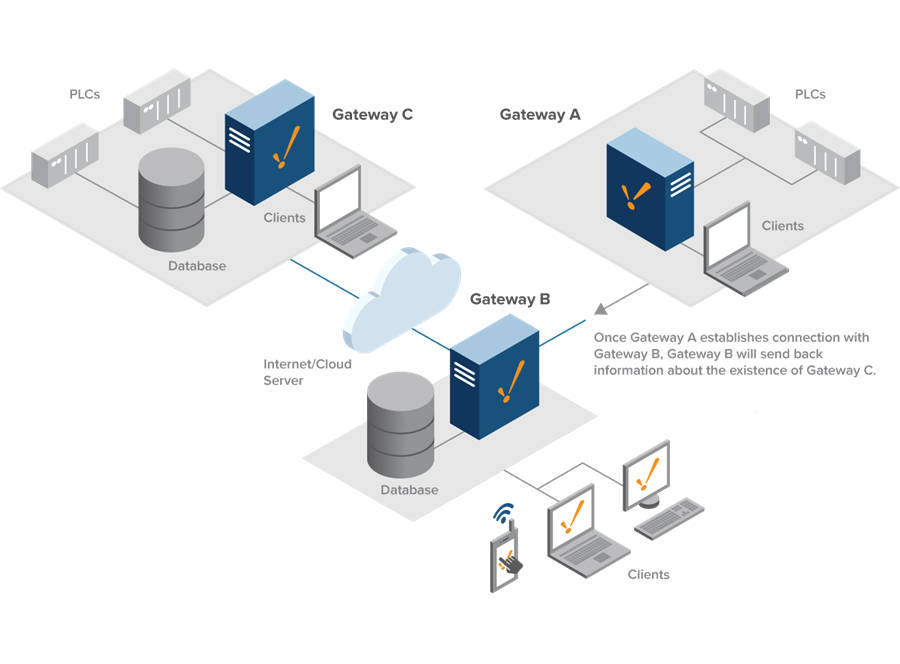 The Gateway Network General Settings set the basic rules for the system. By default, these settings are lenient to allow for easy setup, but can be set for security.

By default, the security level for incoming connections is set to “Unrestricted”, meaning that every remote machine that attempts to connect to the local machine will be accepted without question. You have several options to control security from the Gateway Network settings.

Note: These settings are independent of SSL mode, which is detailed below. To change security settings, go to the Gateway Webpage and navigate to Config -> Networking -> Gateway Network and select the General Settings tab.

Setting Up a Gateway Network Connection

Setting up a Gateway Network Connection

To establish a basic communication link between two Gateways, first log into the Gateway where you want to establish the outgoing connection. For this example, we use an SSL connection.

Outgoing and incoming connections can be deleted for cases when the connection no longer exists on the other side.

When a remote machine establishes an incoming connection, its Gateway server name is transmitted and appears in the Server Name field under Gateway Network -> Incoming Connections. However, no identity authentication is performed when the connection is created. The local system accepts the remote system id without question. To perform identity authentication on a connection, you must use Secure Socket Layer (SSL) and certificates. By default, SSL is enabled.

Note: When using the Gateway Network and Redundancy, SSL Certificates are automatically pushed from the redundant Master to the Backup. 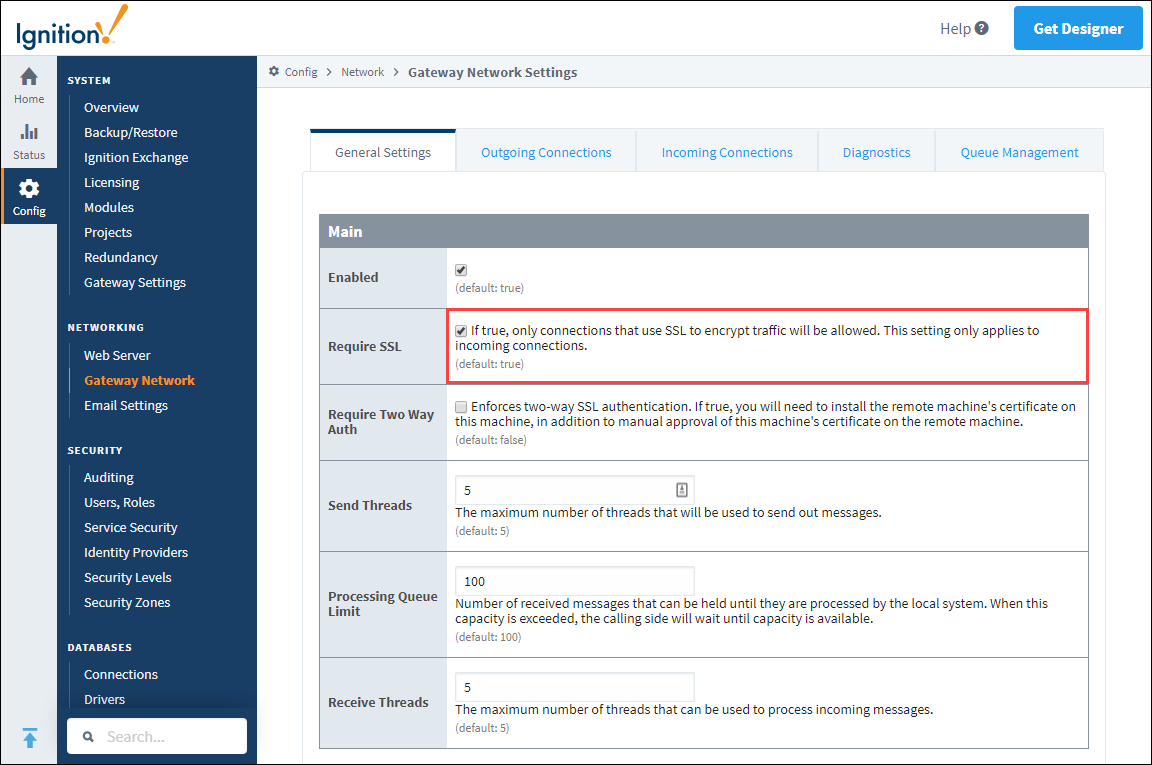 The Diagnostics tab on the Gateway Network Settings page gives you insight to the Gateway and and remote server response times.

Ignition's Gateway Network system shares information across Gateways using a configurable number of send and receive threads. Ignition's Gateway Network also has a queue associated with each Ignition sub system. These queues enable Ignition to prioritize which subsystem should have access to a send or receive thread at any given time. For example, there are two Gateways, Gateway A and Gateway B, connected via Gateway Network. Gateway A is sending a lot of Tag History queries to Gateway B per the Outgoing Tasks list of Gateway A. If Gateway B takes a long time to return a query result for each query request, Gateway B could potentially starve the send or receive threads for the connection. Starving the send or receive threads for the connection could potentially affect other Ignition sub-systems aside from Tag History. A solution is to limit the Max Active setting on the Call Results Queue configuration in Gateway A to 3. This will make sure that no more than three send or receive threads are used for the Tag History requests coming from Gateway A. Doing this will slow down the Tag History requests and therefore the Tag History queries but it will allow for other Ignition sub systems to gracefully send and receive messages without interruption. The Queue Management tab allows uses to manage how a queue should behave for a specific Ignition subsystem. The queue settings for each type of outgoing queue are displayed on this page along with each queue's description.

Clicking the Modify button for one of these queues will bring up the Queue Settings page as below: