Ignition redundancy supports 2-node systems, this means there are two copies of the Ignition Gateway. One node (the Master Gateway) is considered the master node and the other (the Backup Gateway) is the backup node. Both nodes share the same state or configuration. In other words, all projects, Gateway settings, and so on are shared between the nodes. The master node manages the configuration then replicates it to the backup node.

When you have the redundant system in place, you can get detailed status information by going to the Status tab of the Gateway webpage as shown here and looking at the system's map: 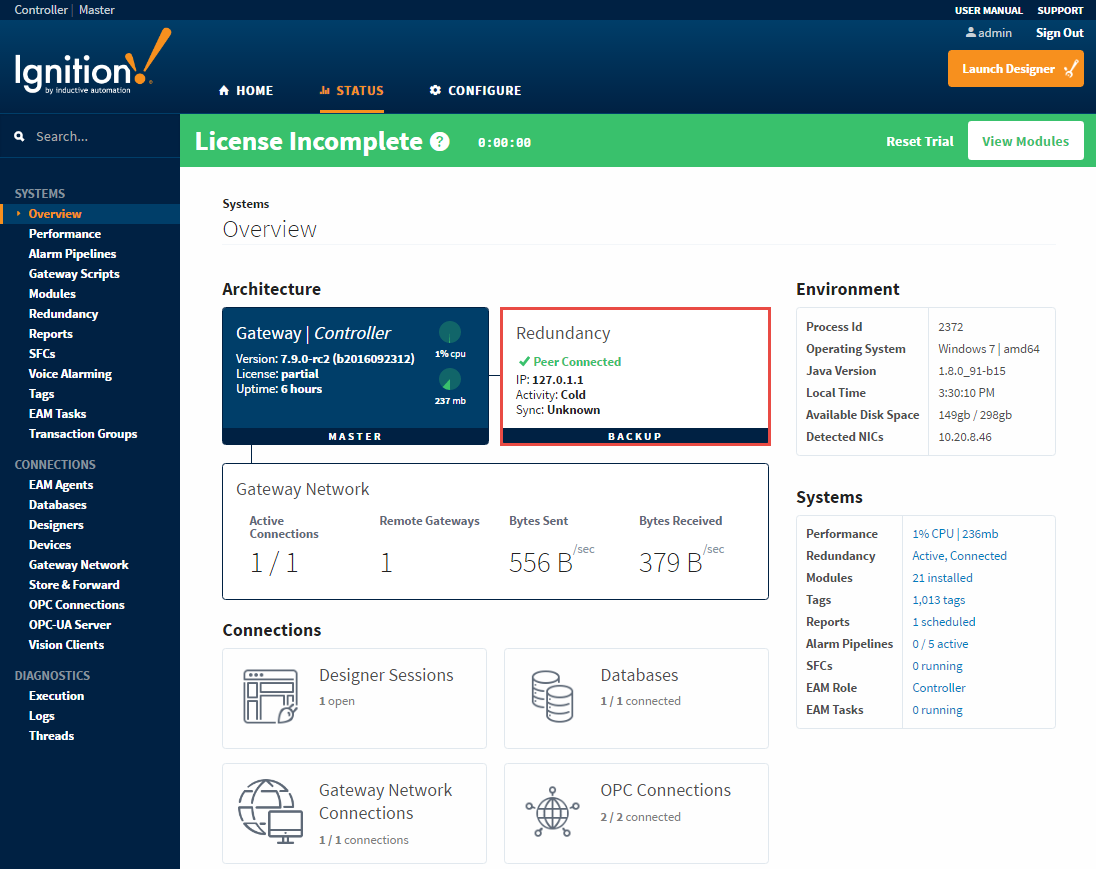 Learn about updating redundant servers and how to make the process a success.

Link to Knowledge Base Article

The master and backup nodes communicate over TCP/IP. Therefore, they must be able to see each other over the network, through any firewalls that might be in place. By default, all communication goes from the backup to the master node on port 8750. Therefore, that port must allow TCP listening on the master machine. You can change the port from the Gateway webpage in the Redundancy settings page.

The master node maintains the official version of the system configuration. You must make all changes to the system on the master Gateway, the backup Gateway does not allow you to edit properties. Similarly, Designer only connects to the master node.

When changes are made on the master, they are queued up to be sent to the backup node. When the backup connects, it retrieves these updates, or downloads a full system backup if it is too far out of date.

If the master node has modules that aren't present on the backup, they are sent across. Both types of backup transfers, data only and full, will trigger the Gateway to perform a soft reboot.

Information that is only relevant to the running state, such as current alarm states, is shared between nodes on a differential basis so that the backup can take over with the same state that the master had.

On first connection or if the backup node falls too far out of sync, a full state transfer is performed. This information is light-weight and does not trigger a Gateway restart.

Once connected, the nodes begin monitoring each other for liveliness and configuration changes. While the master is up, the backup runs according to the stand by activity level in the settings.

When a node is active, it runs fully, connecting to any configured OPC servers, and communicating with devices. When it is not active, its activity level is dictated by the settings, either warm or cold.

In warm standby, the system runs as if it were active, with the exception of logging data or writing to devices, allowing for faster fail-over.
In cold standby, the system does not subscribe to tag values, and does not communicate with any device. This allows the system to standby without putting additional load on the devices and network. Fail-over takes slightly longer, as tags must be subscribed and initialized.

Historical data presents a unique challenge when working with redundancy because it is never possible for the backup node to know whether the master is truly down or simply unreachable. If the master was running but unreachable due to a network failure, the backup node becomes active and begins to log history at the same time as the master, who is still active.

In some cases this is OK because the immediate availability of the data is more important than the fact that duplicate entries are logged. But in other cases, it's desirable to avoid duplicates, even at the cost of not having the data available until information about the master state is available.

Ignition redundancy provides for both of these cases, with the backup history level, which can be either Partial or Full.

All Vision clients connect to the active node. When this system fails and is no longer available, they automatically re-target to the other node. The reconnection and session establishment procedures are handled automatically, but the user is notified that they have been transferred to a different node so that they can notify the system administrator that the system may need attention.