Ignition features several launchable runtimes: Vision Clients, the Designer, and Perspective Sessions. To help with managing these separate systems, Ignition Gateways provide several "launcher" programs for each runtime. These launchers are the main means of launching an Ignition runtime application. For the purposes of clarify, the following are considered "Launchers":

This page describes the download and installation process common to the launcher applications and Perspective Workstation, as well as the common property settings.

What Is an Application?

To understand the purpose of a Launcher, we need to understand what an application is.  An Application is a configuration in a launcher which is associated with a project.

Below we see the Designer Launcher, which is the launcher for the Designer. The launcher has two Applications configured: one titled "Local Gateway", and the other titled "Production Gateway". Selecting either application and clicking "Open Designer" will launch the Designer for the gateway selected. 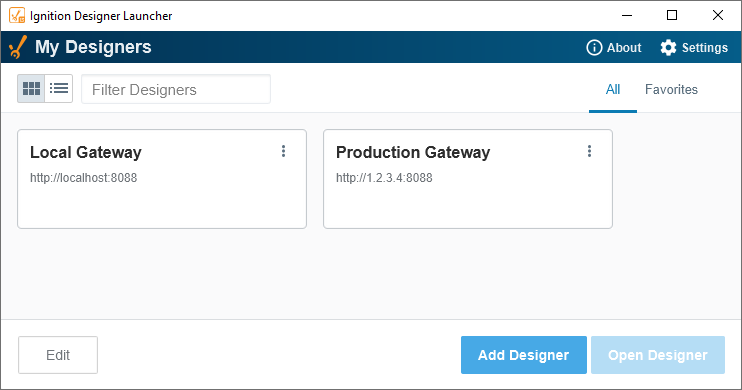 The Vision Client Launcher and Perspective Workstation work under a similar pattern, except each application represents a project in a gateway. Multiple projects from a single gateway can be represented in a launcher. In the image below, there is a "Welcome Portal" application under the Production gateway, while the University gateway features two applications each leading to a different project. 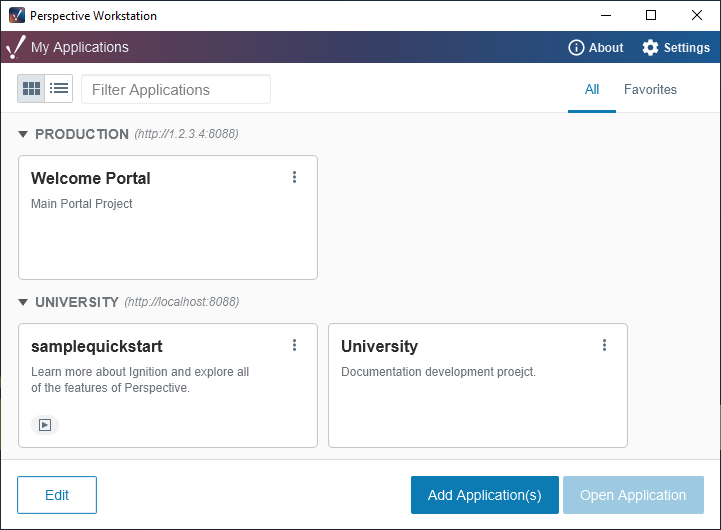 For the sake of brevity, this section will focus on installing the Designer Launcher, but the steps for installing the Vision Client Launcher and Perspective Workstation are all very similar.

However manual upgrades can be performed. Simply download and run a new launcher installer from a more recent Ignition Gateway. During installation, simply set the installation directory to the same directory as the old launcher.

Make this visible upon 8.1.21 release

You can return the Vision Client Launcher, Perspective Workstation, and Designer Launcher versions using your operating system's terminal (PowerShell for Windows). The following table lists the commands for returning the version number by launcher:

The following Designer Launcher example is used to show how to add applications for the Designer and Vision Client Launchers and the Perspective Workstation.

The Designer Launcher , Vision Client Launcher and Perspective Workstation  can be installed on Windows systems from command line without any user prompts.

Normally, each Ignition Gateway includes files for the various launchers. When you download a launcher from a Gateway, it simply streams its local launcher files. However, you can override this behavior, causing the Gateway to ignore it's local launcher files and instead download launchers from the internet. For more information, see the  Gateway Configuration File Reference page.

If you simply wanted to download one of our hosted launchers, without modifying your Gateway's configuration file, you can download them directly from your web browser:

Where VERSION is the Ignition version (i.e., 8.1.0), and LAUNCHER is the name of the launcher. Launcher names are listed below.

Append to table above and make visible upon 8.1.21 release

For example, the following would download an 8.1.0 version of Perspective Workstation for Windows:

When a shortcut to an application is created, a launchable link is placed on the desktop of the user. This link uses the configuration of the application that is saved in the launcher. This ensures that updates to the launcher are respected even if the link was created before the changes. That being said, you can override the following settings for the shortcut itself:

The values for these settings can be found elsewhere in this User Manual: general launchers settings are on the Launcher Settings page, while each of the three launcher pages list settings unique to particular launcher.

You can also redirect the cache directory that is used by the launcher. Typically the user’s cache is in their home directory in the “.ignition” directory. This holds all the resources that are required for launching a client as well as the resources for each launcher. Sometimes this is not desirable, for example in cases where you want a global cache that all users on a machine rely on or when you want the users client cache to reside in a different directory under AppData.

To change this directory, place a file named redirect.txt inside the .ignition directory in their user home directory. This file should have a single line in it which is an absolute path to the appropriate file.