Ignition's licensing is unique and easy to use because Ignition is licensed by the server, not the client. You only need one license for your server; any clients are automatically included. In addition to that, an Ignition license is unlimited and sold based on which modules you want. There are unlimited clients, Tags, and projects. Buy only the modules you need, and don't worry about running into limits. If you want to test other modules, you don't need to do anything extra because of our built-in Trial mode.  All unlicensed modules can be reset in 2 hour trial mode.

Our goal at Inductive Automation is to provide an easy way to access and learn Ignition. We want everyone to have the opportunity to try Ignition and start working with it with no restrictions. You can download Ignition from our webpage, install it, and start using it for two hours at a time.  At the end of the two hour time period, all modules will stop running, but don't panic, you can reset the timer to run for another two hours.  You can reset the timer as many times as you want, so go for it! The Gateway Webpage and the Designer are not affected by this trial, so you can develop for as long as you want without interruption.  If you do have a license, any unlicensed modules will run in this Trial mode, but licensed modules will never timeout.

You can re-start the Trial period by logging into the Gateway, and clicking Reset Trial to enable another two hours of execution. The Trial Timer may be restarted any number of times. Depending on the module, you may need to take some additional actions. For example, the Vision Clients requires you to log out and back in again in order to continue the Trial.

In the Gateway, the Trial Time banner is displayed near the top of the screen. To reset the trial timer, click the Reset Trial button:

In a Vision Client (for Edge or Ignition Standard), the banner appears near the bottom of the screen. 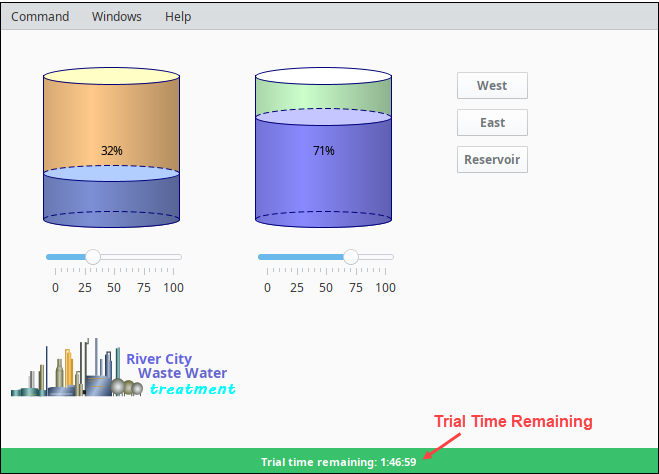 You can activate your license in two ways:

A license key with eight characters signifies a Leased License. These types of licenses also require an activation token, which is a very long, unique, string of characters that must also be provided before a Gateway is licensed. Leased licenses are ideal for containerized environments (Docker, Kubernetes), as well as cloud-based deployments.

This type of license requires that the Gateway frequently check in with an activation service to validate the license.

In order to reach the activation service, the Gateway must have internet access at all times.

Activating a Gateway with a leased license follows a similar flow to the standard license's online activation.

In addition, when selecting Maker Edition during installation, a leased license and activation token are required.

In order to better support our community of third-party module authors, we also allow for multiple license keys to be installed on a single Gateway.  A third-party module author can issue a license key for their module directly to a customer, whereby, they can immediately do an install of the module. To learn more, check out the Third-Party Module Showcase to find and purchase modules that extend Ignition's functionality.

In the image below, two licenses have been applied to this Gateway, but only one is active.

This page has two sections, which detail different information.

Applied Licenses shows all licenses that have been applied to the gateway. Entries here are typically purchased or given, and have a license key associated with them.

Effective Licenses provides a summary of modules active on the gateway. Modules are active if they're provided by an applied license. This area is the result of potentially multiple licenses across various activation mechanisms. For example, if license A provides module A, and license B provides module B, then Effective Licenses would show that both modules A and B are active on the gateway. The caveat here is that the modules will only appear if they're installed on the Gateway. In this same scenario with licenses A and B, if module B was not installed, then it will not appear under Effective Licenses.

For more information on installing new modules, see the Installing or Upgrading a Module page.

Don't be alarmed by a 'License Incomplete' message on the green banner. Click on the View Modules link within the banner.  It opens an informational message box showing modules that are installed. Some of the modules are in Trial Mode. 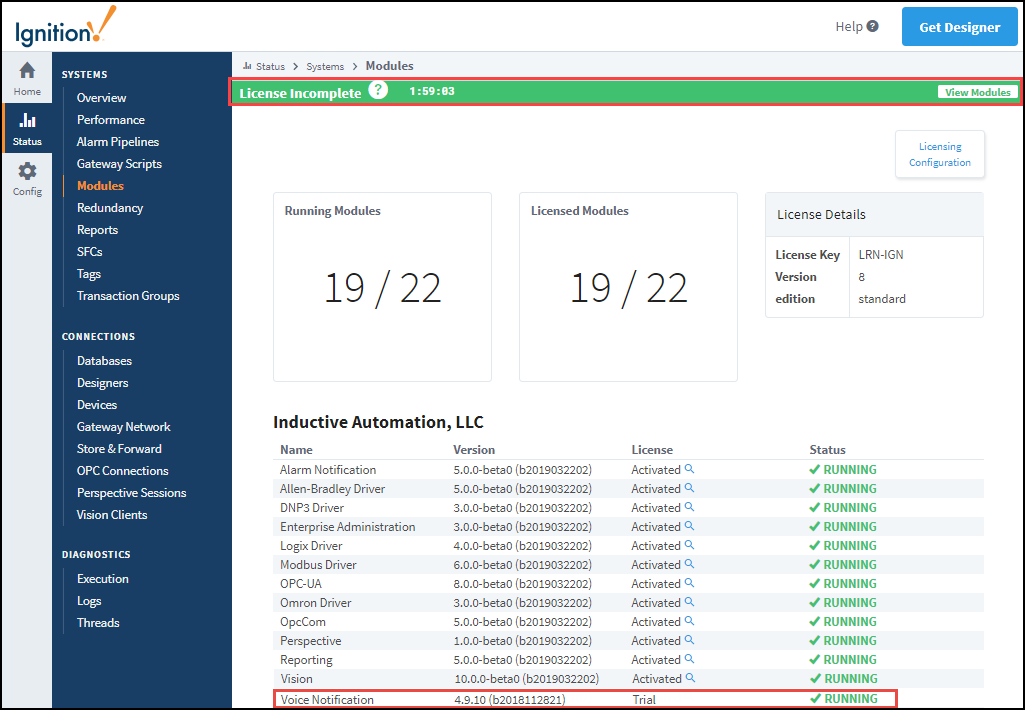 If you added one or more new module to an existing license, then you'll need to update (Reactivate) the license. You update a license from the Config > Licensing section on the Gateway webpage.  Simply click the Reactivate button next to the license that was changed, as shown below. 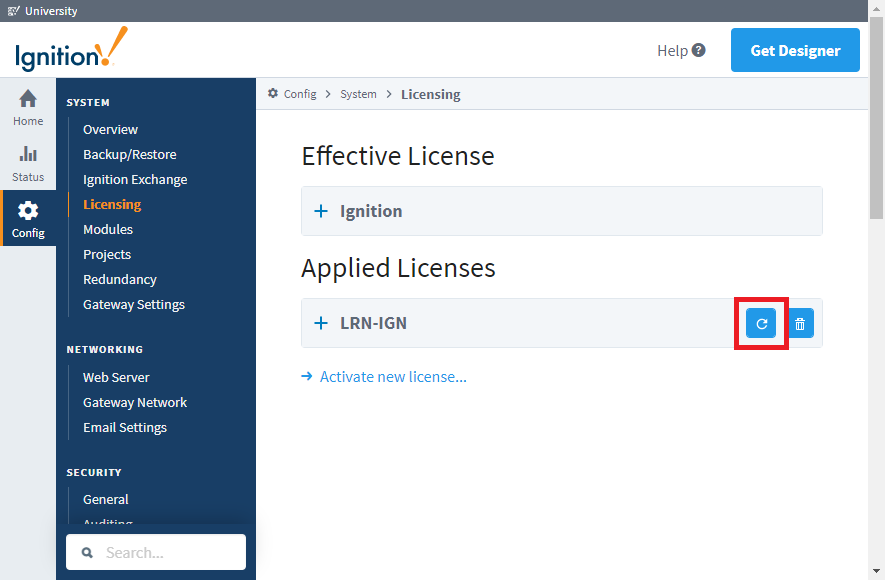 Pressing the Reactivate button will cause the gateway to attempt to reach out to our licensing server, and will update shortly after.

If the gateway does not have internet access, it will be unable to update automatically. In this case you'll need to do the following:

For a given license key, a limited amount of simultaneous activations are allowed at a given time. If you want to activate Ignition on a different server, you must first unactivate it on the current server. You can unactivate the license on one Gateway, and then activate it on a different Gateway if needed. Unactivation occurs immediately over the Internet, and makes this license available for activation on another machine.

To unactivate the Gateway, do the following steps:

In the event your Gateway is unable to reach our licensing server, you will need to perform an offline unactivation.

To perform an offline unactivation, do the following steps:

In cases where you may have a hardware or OS failure and you cannot unactivate a license, Ignition provides an Emergency Activation mode. In this mode, you can temporarily activate your license for 7 days giving you enough time to contact Inductive Automation Support.

How to Activate in Emergency Mode

Activating your license in emergency mode is exactly the same as activating with your normal license, you don't have to do anything different because Ignition handles it all for you. See License Activation above for details on how to activate. The Gateway will know to run in emergency activation mode and it will display a timer stating how many days, hours, and minutes you have remaining in the Emergency Activation Mode banner.  Any time before it expires, you can contact Inductive Automation Support to get your license fixed.