These The Client and Gateway Event scripting workspaces are located in the Project menu of the designer Designer underneath Properties, or in the Project Browser under Project>Scripts Project > Scripts. Each Scope has its of the two Scopes have their own set of events , most of thembeing the same type of event in each Scope.but there are several repeated events. Even with the same names, different things may trigger the different Event Scripts.

Client scripts Client Event Scripts execute in the running Client, which means that they may never execute ( if no clients are running), or they may execute many times ( if multiple clients are running). Client scripts Event Scripts will also execute in the Designer, but only in Preview Mode. Because Clients are full-fledged applications, the scripts Client Event Scripts run on the computer running the Client, not on the Gateway's host server computer. This means that they don't have access to the Gateway's file system, and so on.

Gateway Event Scripts execute on the Ignition Gateway service. This means that they will always execute as long as Ignition is running, even if there are no clients

open. If there are multiple clients open, these scripts will still only run once. For example

, if you have a script that writes to the

Tag changes, it belongs in the Gateway scope so you don't get duplicate records when multiple clients are open.

In the Client scripting scope, these Client Event Startup scripts run after a user successfully logs in to the client, but before any "Open on Startup" windows are opened.  Client Event Scripts can be used to open up a custom set of windows based on who logged in.

The Shutdown Script event run runs at the shutdown of either the Client or Gateway. It allows you to run a piece of code as the shutdown is occurring. After the script is run, the shutdown will finish.

Will The Gateway Shutdown script will run as the Gateway shuts down, such as from the Gateway Control Utility.

The Client Shutdown script will run as the Client shuts down or logs out, such as with a script, or by clicking the close window "X" at the top of the OS window

which is typical in most Operating Systems.

The Shutdown-Intercept Script event is unique in that it runs when a user attempts to shutdown a client, but before actual shutdown occurs. This means it will actually run before the Shutdown Script, and there is only a client version of it. There is a special event object that you can set a cancel property to prevent shutdown by using the code "event.cancel = 1." Doing this will cancel the shutdown event and leave the user at the spot they were last at. This allows you to set special restrictions on restrictions  when the client is actually allowed to shut down, such as having a certain role, as seen in the example below: 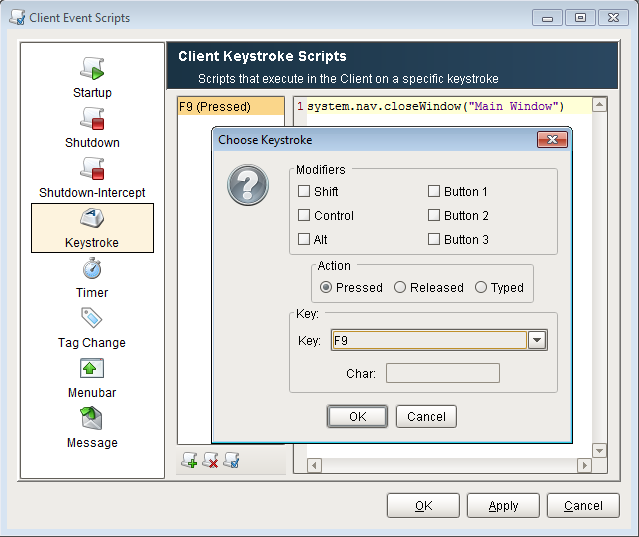 ) the currently selected Timer Script. The Timer Script has three major properties to be aware ofsettings: the Delay in milliseconds, the Delay Type, and the Threading.

) button to remove the selected script. To specify multiple Tags for a given script, enter them one per line in the tag Tag paths text area. To quickly add many tagsTags, you can open the Tag Browser (

) and drag-and-drop tags Tags from the window onto this text area. The actual script is then entered in a different tab. When executing, each Tag Change Script runs in a separate thread. This prevents long running scripts from blocking the execution of other Tag Change Script.

Having the Tag Change Scripts run in the Gateway Scope means that the scripts will trigger when a Tag in their tag Tag list changes as long as the Gateway is running. The script will be able to interact with the Gateway and other Tags, but not the project.

Having the Tag Change Scripts run in the Client Scope means that the scripts will trigger when a Tag in their Tag list changes, but only if a Client of that project is open. This means that if no Clients are open, the script will not fire, regardless of the number of times the Tag changes. Howeverand if many clients are open, the script will fire once for each open client. Additionally, because this is run from the Client Scope, it will have access to Client resources such as Client Tags and can trigger things in the Client such as opening a window.

Image Modified) nodes. You can also move the nodes up (

Image Modified) or down (

Image Modified) in the hierarchy, as that will affect the order they appear in the Client. You can also delete (

Each node can also be given an accelerator and a mnemonic character. The accelerator is a key or key combination that can be pressed at any time in the client to initiate that nodes event. It will display next to the name of the node in the client, and works much like many commonly known accelerators such as Control + S to

Save. The mnemonic character is a key that can be pressed when currently in the menu to initiate the node event. If the character chosen is in the name of the node, then that character will be underlined.