What Is a UDT?

By defining UDTs and using these “data templates”, you can generate Tag instances to rapidly build complex screens. A change to the type definition is then inherited by all instances, drastically saving time when making routine changes.

The UDT data types are fully supported by Vision Templates, which means you can configure templates for your custom data types and take advantage of drag-and-drop binding to rapidly build complex screens.

Definition
A Definition represents the structure of a UDT. Definitions don't run, so Tags inside of a Definition won't poll or subscribe to anything. Rather they represent a Tag structure which Instances will inherit from. Changes made to a Definition are automatically applied to any Instances of that Definition. 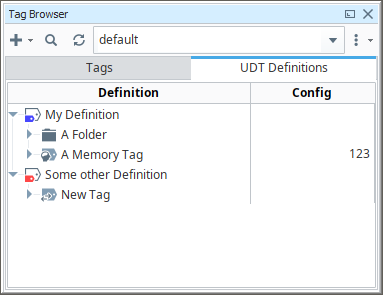 Instances
Instances are running copies of a Definition. All Instances have a "Parent Type", which is the definition that the Instance is inheriting from. The structure of an Instance is defined by it's parent Definition, so you can not add new Members to an Instance. However, you can override the values on properties in any Member.

In the Tag Browser, UDT Instances can be found under the Tags tab, and are signified by either a plain white Tag

icon, or a Tag

icon with a vertical stripe. Furthermore, you can expand the UDT Instance and find the members (other Tags) in the UDT. 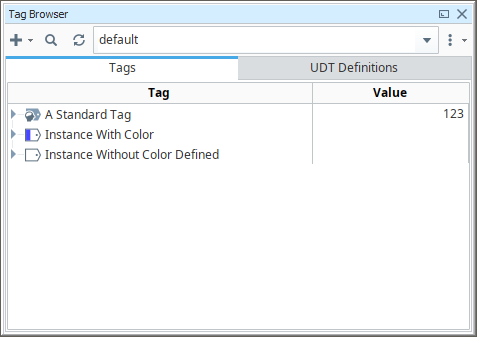 Parameters
Parameters are user created properties that can be used to create parameterized data templates. Parameters are configured on Definitions, and their values can be overridden on individual Instances. You can replace values on a member in a UDT with a reference to a parameter, allowing for For example, if a data type consists of three OPC Tags that only differ by a number in the path, you can use a parameter for the "base address", allowing instances to be created with only one setting.

Root Node
The top level item in a UDT.

Members
Members are the Tags inside of a data type or instance. Members are always under a Root Node. Members can be standard Tag types or an instance of another UDT. 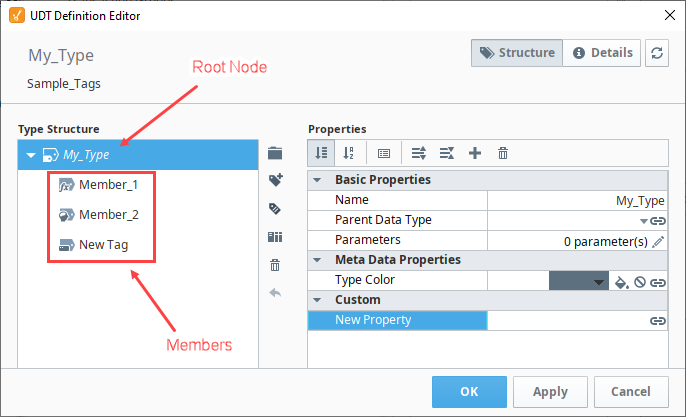 Override
Instances are copies of a Definition, but in some cases you may wish to change the value of a property on a particular member (Tag) in a UDT instance. This is called Overriding the property, allowing the property to have a value that deviates from the Definition.

Creating a UDT Definition and Instance

In these series of examples, we will create a very simple UDT Definition, make an instance of it, and make some additional configuration changes.

In this example, we'll demonstrate how to create a UDT Definition.

Now that we have a UDT Definition, we can create a UDT Instance. You can use the Multi-Instance Wizard to make many instances quickly, but you can also create a single instance.

Instances inherit their structure and properties from the Definition, but property values can be overridden on an instance.

Make Changes to the Definition

Now that we have some instances, we can make a modification to the Definition, which will propagate the change down to the Instances.

While editing a UDT Definition or Instance, the Tag Editor will show some unique properties on the Root Node. 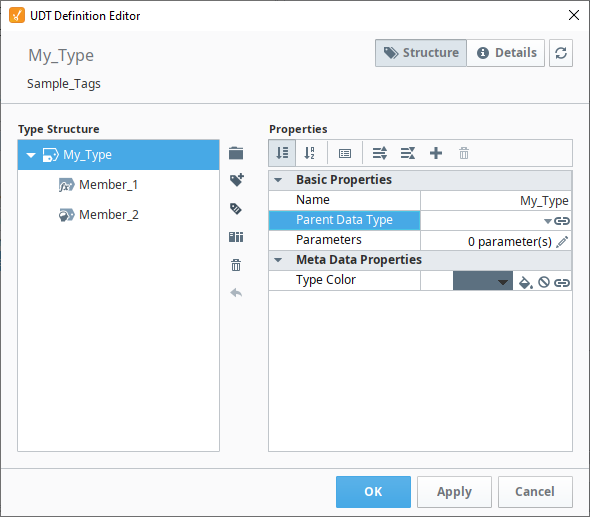 This feature is new in Ignition version 8.1.0
Click here to check out the other new features

UDTs can be color coded, which applies a color to the Root Node. This is purely a cosmetic change, but can be helpful in systems with a large number of instances, as the colors can make certain UDTs stand out from one another.

Color is applied to the Definition, via the Type Color property. 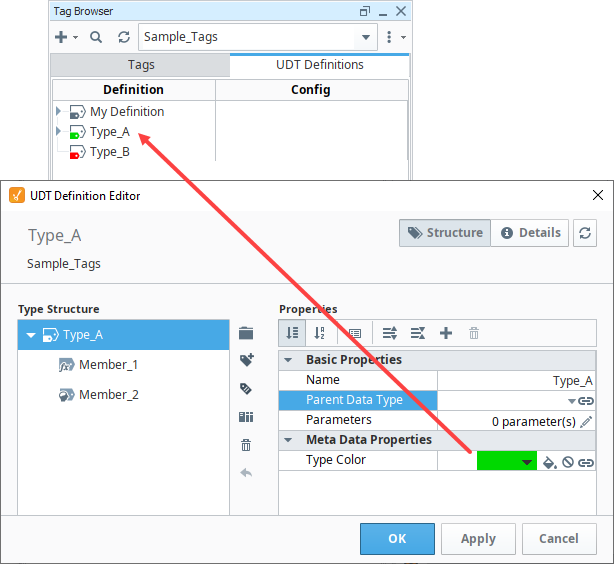 Any instances of that type will apply the color to the Root Node. 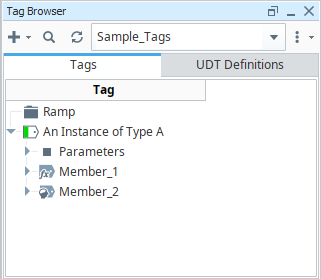 Both Perspective and Vision feature a "binding" system, that allows components in those modules to display live values on Tags. In regards to UDT instances, component bindings can bind to members just like any standard Tag, but they can also bind directly to the UDT instance, which results in the binding receiving live live values from all members of the UDT.

In the image below, a Perspective Markdown component has a Tag binding on its source property. The binding is leading to the root of a UDT instance. As a result, the member values are shown on the component. They're also live values, so any value changes on any member will appear on the Markdown component. 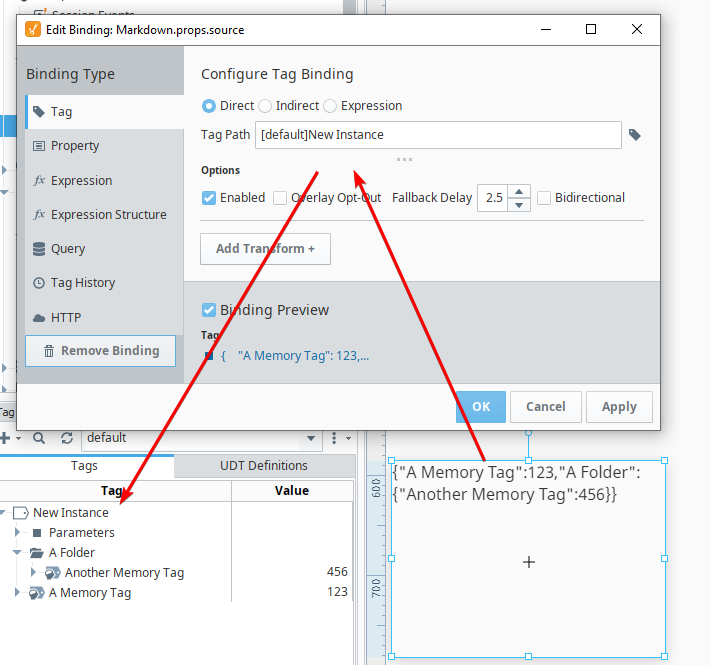 In Vision, this is also possible, but you'll want to point the Tag binding at the .jsonValues attribute on the Tag, which involves manually typing it out in the binding window as follows: 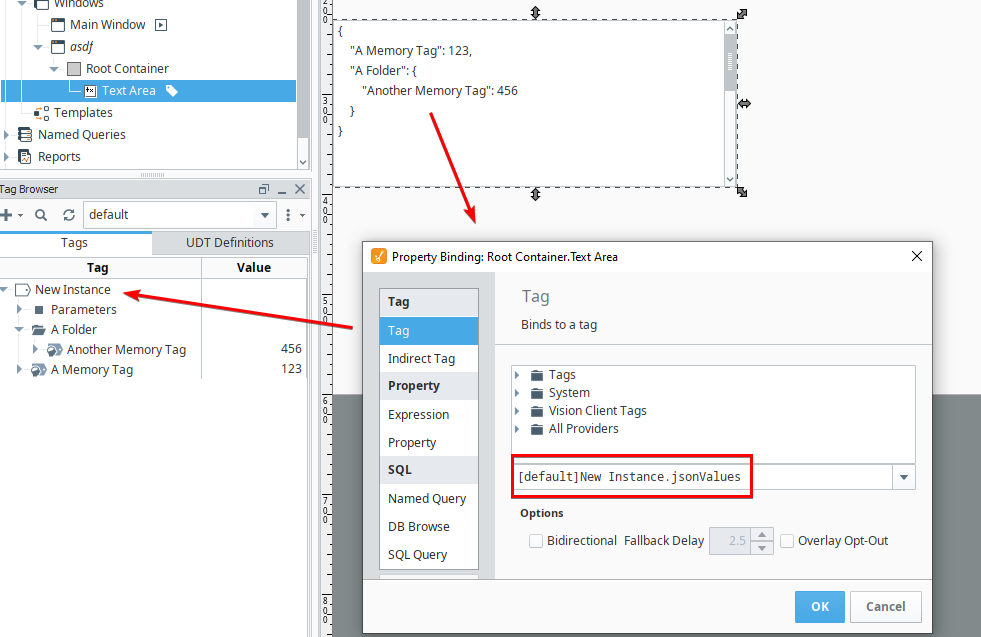