With Security Levels, you define a hierarchy for access inside a Perspective Session or Vision Client. This authorization system provides a way for you to map roles from an Identity Provider (IdP) to Ignition roles. Any IdP can be used to provide roles, and security levels are independent of the type of IdP being used. Any role from the IdP is automatically granted to the user as a role, but only roles in your Security Levels are available to the security screens in the Designer. You can also use the User Grants option to grant additional access for each user.

Security Levels are defined at the Gateway and they are arranged in a tree structure. Each child (nested) level of the tree inherits the security of its parent levels. There are four reserved Security Levels in the platform: 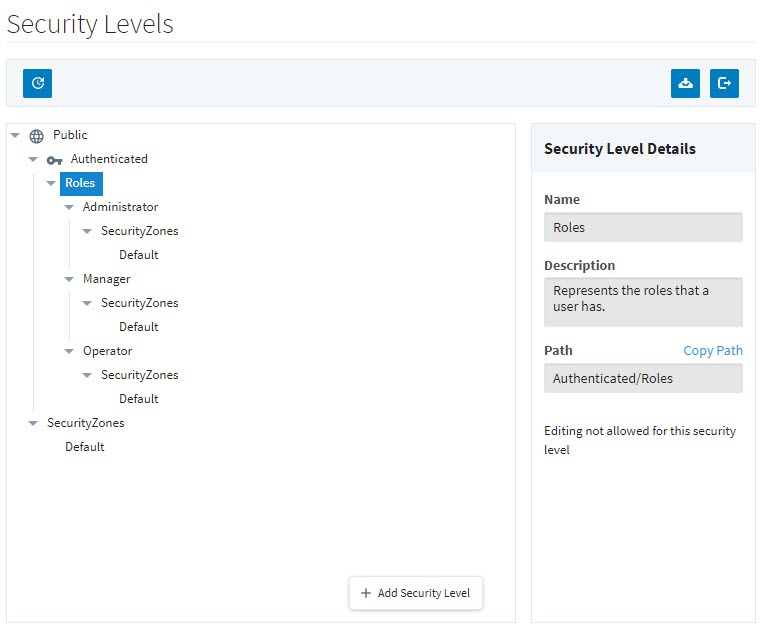 The following feature is new in Ignition version 8.1.16
Click here to check out the other new features
You may now copy the selected Security Level Path to your clipboard by clicking Copy Path in the Security Level Details panel:

The reserved security levels are mostly created for you, and have special rules that determine when a user is granted that level. They can't be renamed or deleted.

The Roles level is a special level which itself has no special rules, but it acts as a parent placeholder for potential roles returned from the IdP. This particular level is not configurable; however there can be levels added underneath the Roles level as children. These levels should correspond to the names of roles that would be expected from the IdP. If the IdP provides role information, these roles are automatically mapped to the child security levels underneath Authenticated/Roles. The names of the roles must match exactly for them to be correctly mapped to. For example, if you authenticate against the Ignition IdP configured to delegate to the Internal user source, and your user was granted the roles “A”, and “B”, you would have (at a minimum) the following security levels granted to you:

Note: You can only add one level of children to the Roles Security Level. Custom Roles can be nested as deeply as you want.

Caution: When you delete a Security Level, all children under that level will also be deleted.