Tags offer a great amount of power in system design and configuration. The ability to aggregate Tags from a variety of installations means that you can build widely distributed SCADA systems more easily than ever before with a high level of performance and relatively easy configuration. The following are key tools and concepts for understanding Tags in Ignition.

The Tag Browser is the central location for interaction with all types of Tags on your system. It gives you full view of the Tags including the current value, datatype, and any traits.  When panels are in their default configuration in the Designer, the Tag Browser appears at the lower left-hand side of the screen. 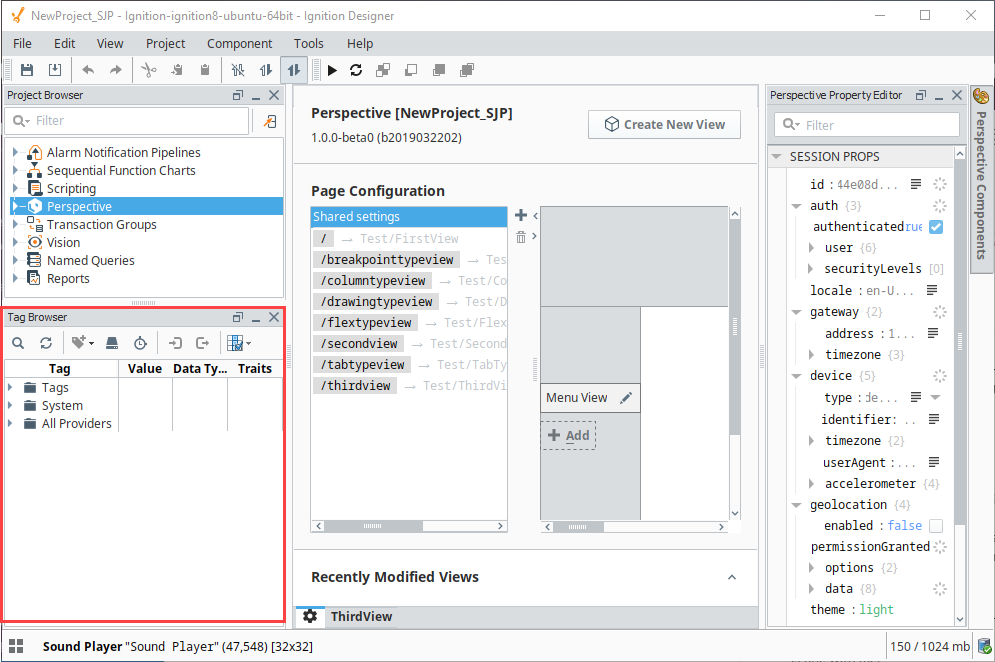 The Tag Browser is set up in an interactive tree structure with folders that can be expanded or collapsed to view more Tags. Click on the Expand

icon to expand any folder or the Collapse

icon to collapse the folder. In the example below, the pH Tag for Tower2 has been expanded. 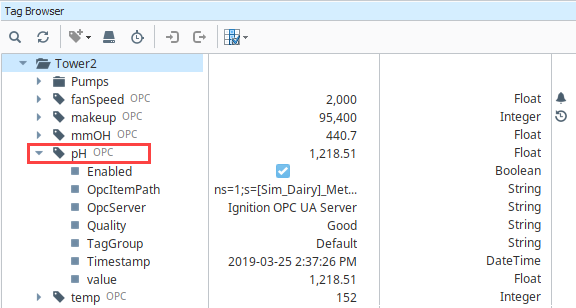 Clicking on the Search

icon  in the Tag Browser will open up the Designer's global Find/Replace screen. In the the example below, we searched for the Ramp9 Tag and limited the search to the default Tags.  Results are shown at the bottom of the screen. For additional information, see Find and Replace.

icon refreshes all of the Providers in the Tag Browser. This is useful if you or others have modified Tags but do not see an update. In general, this button is not used very often.

icon opens a context menu showing all the options to add a Tag, Folder, UDT Instance or a UDT Definition. The new object is added under the Folder you have selected or as a sibling to the Tag you have selected. This button is disabled if there is no selection. See Creating Tags for more information. 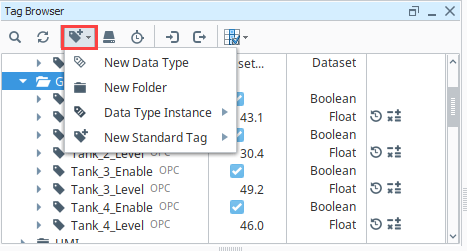 With the OPC Browser, you can browse to find external PLC or OPC Tags. Click the OPC Server 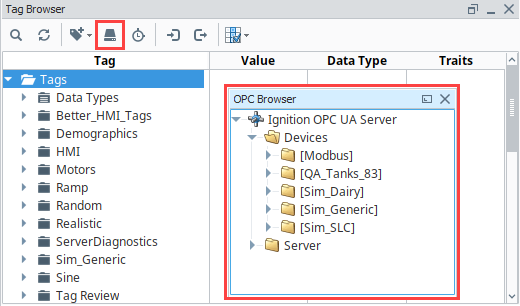 In the Tag Browser, the Tag Group

icon opens the Tag Group Editor window. Tag Groups dictate the rate of execution of Tags. This is where you set up your Tag Groups and scan rates. See Tag Groups for more information.

Ignition can export and import Tag configurations to and from the JSON (JavaScript Object Notation) file format. Use the Import

icon to import and export Tags in this Gateway. See Exporting and Importing Tags for more information.

The Tag Browser displays the Value, Data Type, and Traits columns by default.  To toggle any of the options, click on the Column Selector

In the example below, we changed the Column Selector so that only the Tag values are shown next to the tag names. 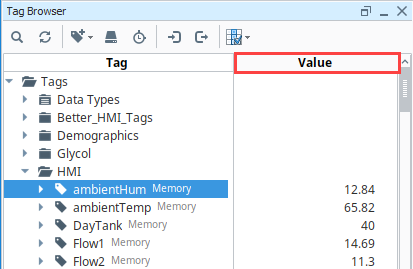 Certain settings or Tag configurations are visually represented next to the Tag in the Tag Browser.

The following icons enable you to note some important settings on the Tag at a glance. A description of the icons are listed below.

Editing Tags is done mostly through the Tag Browser. The Tag Browser allows you to right click on a Tag or folder to perform any of the following functions. Note that different objects will have different options available. The special Data Types folder is slightly different than a regular folder and will have even fewer options. 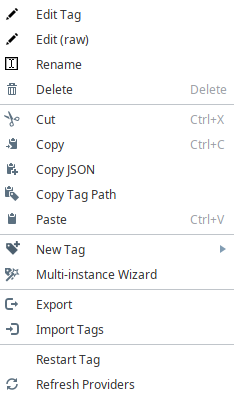 The Tag Editor is robust interface that contains all the properties that can be configured for Tags. In the Tag Editor, you set the Tag's name, value, numeric and meta data properties, security, alarming, history, and more. For more information, see Tag Properties. 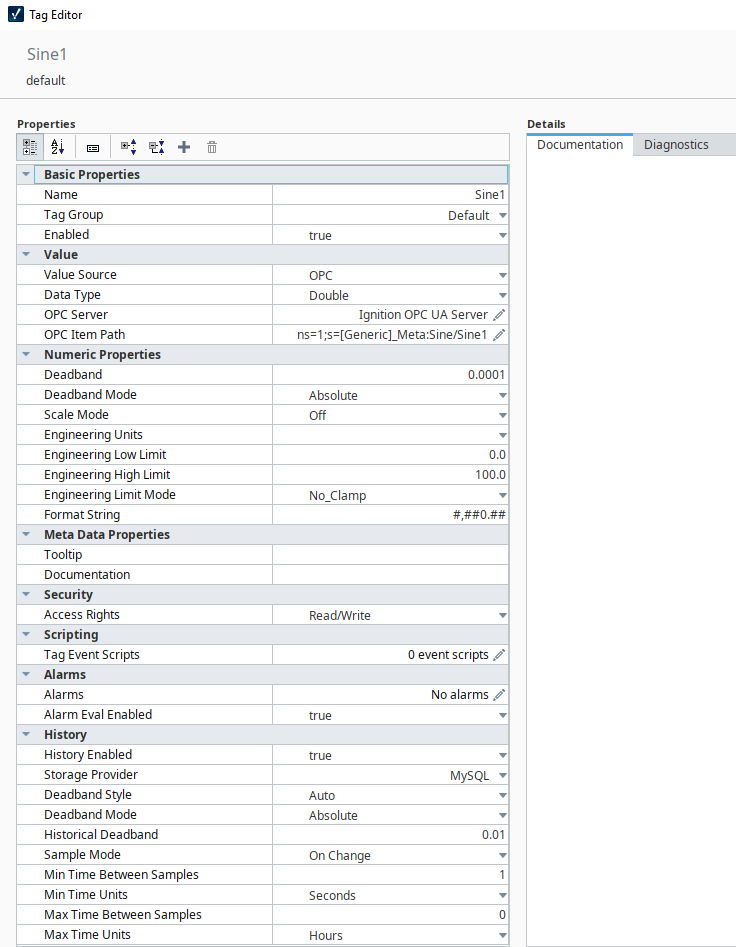 Tags names are flexible and to not have to match data source names (like an OPC path) or tag codes (such as N7, F8, etc.). It is not necessary that Tag's name be related at all to its underlying data source (OPC path, for instance). This provides a level of indirection that is convenient for systems with many repeat Tag structures.

It is important to give Tags a meaningful structure and arrange them in hierarchical Tag folders so that they are easy to understand, identify, and locate for all developers. By default, Ignition Tags are named after their OPC Server address when a Tag is dragged into the Tag Browser. You can change this name to just about anything that you want. We recommend using names that mean something to your process, such as "Motor 3 Amps." Alternatively you could create folders in your Tag Browser such as "Motor 3/Amps.". When renaming Tags and folders, there is really only one question to ask: "does this structure make sense?"

Another important concept to consider when naming and organizing your Tags, is to do this early in your project.  If you rename or move any of your Tags to another folder, and your Tag is being used in other places, chances are you are going to break the reference to the Tag on your screen.  So keeping your Tags organized and defining your Tag structure early on in your project is critical.

When you choose a new name for your Tags and folders, there are some rules that must be followed. The first character of the Tag name must be one of the following:

The second character, and every character after that can then be one of the following:

All other special characters can not be used in a Tag name.

Tags and their properties can be referenced by a string-based path. Each Tag has a unique absolute path and often has many equivalent relative paths when referenced from other Tags. You most often generate these paths by browsing or through dragging. However, it's a good idea to understand how Tag paths work, particularly if you get into indirect Tag binding or scripting.

A Tag path looks something like this: [Tag Provider]folder/path/tag.property

The folder/path/tag.property portion of the path may contain the following:

The [Source] portion surrounded by square braces can have the following options:

What about Perspective Client Tags?

There are no "Client Tags" in a Perspective Session. Take a look at the Session Properties for similarly scoped variables.

Paths that begin with [.] or [~] are known as relative paths. They are used inside Tags that bind to other Tags, and are relative to the host Tag's path. Using the relative path syntax helps to avoid problems caused by moving Tags and renaming providers.

[.] refers to the Tag's current folder. By using [.], Tags can be moved from folder to folder without problem (provided that all of the applicable Tags are moved together).  Additionally, you can use ".." (two periods) to go back one folder from the current relative position, for example [.]../../tag allows you to reference a Tag two folders up.

[~] refers to the Tag's provider root. It can replace the explicit provider name, and thus protect against provider renames and importing/exporting/moving Tags between different providers.

Ignition provides a great deal of flexibility for Tag addressing since Tag paths and Tag properties are string-based. The underlying strings that compose a valid Tag path can be assembled from many different parts in with the eventual construction resulting in a valid Tag path.

The following scripting demonstrates this concept. Suppose there was a Tag path to a level indicator in a tank. In this case it is the default Tag provider, Tanks folder, Tank 1 Folder, and the Level Tag.

But suppose that there was more than just Tank 1 and instead there was Tank 2, Tank 3, Tank 4, etc. Dynamically changing the Tag paths is simple because Ignition's Tag paths are string representations. The following takes the tank number and inserts it into a new Tag path. The tankNumber variable changes the eventual creation of the tagPath. Using this method in scripting or in an expression binding will look slightly different.

The result of the tagPath variable will be [default]Tanks/Tank 2/Level which is a valid Tag path to the the level sensor for Tank 2.

Once you have Tags in your Tag Browser, they automatically start executing. The Designer is live, and in the Tag Browser you can see your Tags update in real time. The most commonly used type of Tag is an OPC Tag, which gets its value from a device like an OPC Server. You can connect to just about any type of device out there and show the data on screen, as history, and write back whenever you want. Tags make Ignition extremely flexible and easy to show data. See the Quick Start Guide to get some tags created and in your client.

Once you have some Tags created, you can edit them to include even more features. You can:

In addition to all that, Ignition allows you to create UDTs (User Defined Types) out of your Tags to rapidly develop projects with structured objects. This gives you the ability to create a master type then quickly add many instances. UDTs allow you to make a change in one place and see it automatically propagated to every instance.