The Script Console is a live Python terminal that is only accessible in the Designer. It is a great way to very quickly test a script as it does not rest on a scripting event or specific component. The Script Console can be opened via the Tools > Script Console menu. It consists of two parts: a Multiline Buffer, and an Interactive Interpreter. Code can be typed into both sides.

Due to how "scope" works, the Script Console can not interact with components on a window, but it can call Project and Shared scripts. If a Project or Shared script was recently added, then the console will need to be reset before it can be called. This can be accomplished by clicking on the Reset

icon in the upper right.

Gateway scoped information will not appear in either the Script Console or Output Console. Instead, the output will be sent to the wrapper.log file. Alternatively, system.util.getLogger() will send messages to the Gateway Console, and is a preferred method of troubleshooting Gateway scoped scripts.

There are several icons and UI elements located on the Script Console window. The image below highlights a syntax error. 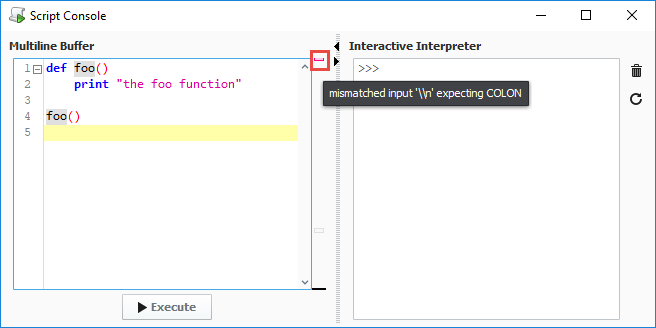 A reference of the icons and descriptions are found in the table below:

The Multiline Buffer, located on the left side of the Script Console, allows for multiple lines of code to be entered and then executed by clicking on the

button. All print statements will output to the Interactive Interpreter. It also supports code folding for function definitions and comments.

The following feature is new in Ignition version 8.0.4
Click here to check out the other new features
When executing a script in the console, the

button will change to an

button. Developers can press the Interrupt button to interrupt / stop a script from executing when testing code with a lot of data, or when the script inadvertently gets stuck in an infinite loop.

Font size in the Multiline Buffer can be adjusted by holding Ctrl and scrolling the mouse wheel.

Right clicking on the Multiline Buffer opens a menu. The menu options are described in the table below. 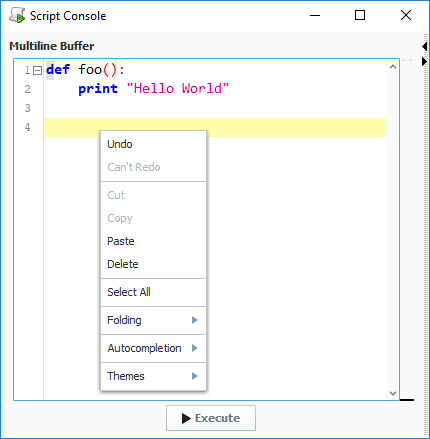 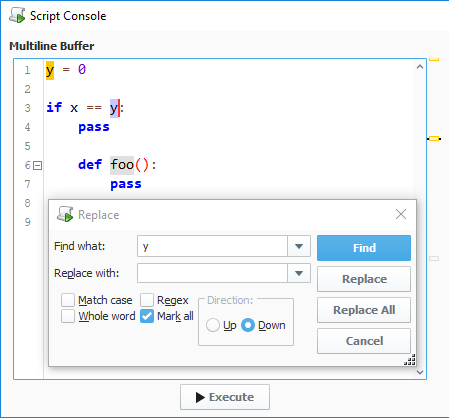 The following shortcuts apply only to the Multiline Buffer.

The Autocompletion window, available in the Interactive Interpreter, has access to the current working environment so items such as Project and Shared scripts will automatically appear. They can also be typed in manually.

The following shortcuts apply only to the Interactive Interpreter