When we talk about versioning in Ignition, there are two main things that come to mind: Software versions and Project versions.

While they may seem similar, it's important to keep these distinctions in mind while you are developing. Both have considerations that can effect the success of your project.

With Ignition there are ways to keep track of your projects and give you the ability to easily test new changes or go back to a previous stable revision when you need to. Two main ways to control your project versions are:

It's important to have a good idea about what software versions you are using, but we make it simple. Ignition only allows one version at a time to be installed on a computer. This means that you never have to worry about which version you are using at the moment. Ignition versions are made up of three numbers: the Platform, major, and minor version numbers. For example, 7.8.2 is platform 7 (Ignition), major version 8 (new features), minor version 2 (stability improvements).

If you want to know what version of Ignition you are using, there are several places you can find it. The two simplest places to find your Ignition version are in the Gateway Webpage and in the Designer. Both of these also list the version of Java that the Ignition service (Gateway) is using. Note: this may not be the only version of Java that is installed.

Ignition backups will work on any version that is the same or newer. For example, a backup taken from 7.8.0 can be restored in 7.9.1, but the opposite is not true. If you are developing on a test server, make sure that they have the same version of Ignition so your backups can be transferred seamlessly.

You can have multiple Java installations (all different versions) on one computer. Java uses version number similar to Ignitions. For example, Java might be version 1.8.0_45 but we often refer to Java as "Version 8 Update X." In this example, the 1 means Java, and it is version 8.0 update 45. The best way to check what Java versions are installed depends on your Computer's operating system, but in Windows you can open up the control panel and click the Java option. If you have multiple versions of Java installed, check the Ignition version (above) to see which Java version is being used. If Ignition is using the wrong one, you can easily Change your Java Version. Depending on your OS and Java version, your Control Panel might look slightly different than this: 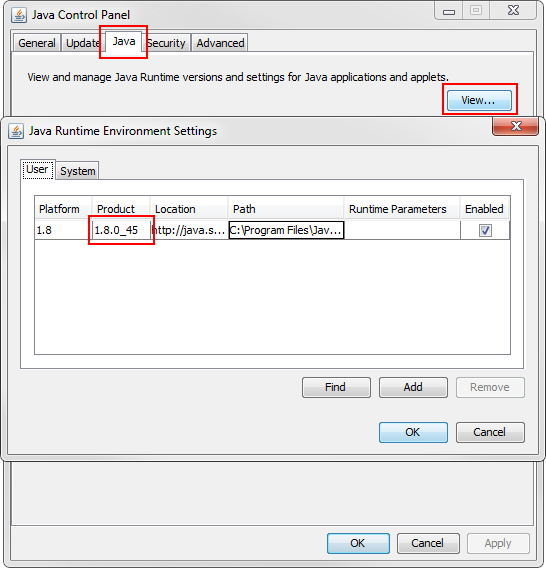 It is not uncommon to connect Ignition to multiple types and versions of Databases, but it is very rare to have multiple versions of a database installed on the same computer. Usually you will see multiple servers handling the load of multiple databases. Fortunately the Ignition drivers for connecting to a database don't work for specific versions, they will work for all database versions. Just pick out the right type (MSSQL, MySQL, Oracle, etc.) and the driver will do the rest. Check out the Database Connections section for more information on getting conected.

Once you complete your project and have it in production, it is a good idea to have a separate Ignition development server for making future changes. That way, the changes will not affect the plant floor and can be completely tested before rolling out to the production environment. It is also recommended to have a development server to perform any Ignition upgrades so any problems can be addressed before moving to a production environment.

Second, the development server does not need a license because you can run the server in its two hour trial mode. Of course, you can get a second license for longer testing periods if you need to.

The EAM allows you to control multiple Gateways from one central location, but can also be used for version control. It has the ability to push resources from one Gateway to another, and this can be applied to a production/development system. You can create tasks that will push your changes at the click of a button. See the Enterprise Administration section for more information on sending projects.