The complete rebuild of the Reporting Module in Ignition 7.8 brought many improvements that would have been impossible to add to the legacy module.  To preserve report functionality and prevent problems with backward compatibility, any existing reports will function as they always have.  To get the most out of your reports and enable new functionality in such as Scheduled Reports, you'll have to convert your old Vision Report Panel components to new Report Resources.  In an effort to minimize barriers, we created a Report Conversion process that will attempt to convert Ignition 7.7- reports into 7.8+ reports.

We encourage users to convert their reports to the new format if they feel they would benefit from the added functionality, but in doing so, it's important to keep some things in mind:

Some Components have Imperfect Conversion

There are a number of components that have been upgraded or completely rebuilt.  Due to the changes, some components and/or configurations may not convert perfectly to the newer module.  Specifically, the upgrade to the Barcode component and addition of 2D barcodes utilizes a new encoding system that does not have perfect parity with the legacy encoder.  The new component does not explicitly support encoders for some of the Narrow and Extended codes, as well as MSI.   Reports which require the Narrow or Extended Code 39/Codabar or MSI barcodes will not convert perfectly.  Lastly, the changes to the Charts brought many improvements, but will look a little different and may require some configuration.

Data Sources are a huge improvement in the new module.  It's now far easier to collect and use data from nearly anywhere in Ignition. Unfortunately, the custom properties in the Legacy Report module do not directly map over to the new Data Sources.  When a report is converted, its custom properties will be converted to Parameters.  Parameters are great in that they allow for a quick conversion and enable things like Scheduled Reports, but Data Sources will need to be manually configured if desired.

These are the two major caveats to be aware of when converting.  The conversion tool has been tested with a variety of legacy reports, but there may be additional factors preventing conversion.  We encourage users to either visit the Inductive Automation forum or contact our support department, and let us know – improvements to the conversion tool can only occur if we are made aware of errors!

With the potential issues covered, it's important to note that report conversions do not destroy or alter the original report.  If the conversion isn't successful for some reason, the new report can simply be deleted and the old one exists as it always did.  If the conversion is successful, the old report can be saved to an unused window or exported as a backup before being deleted. Conversions may not always be perfect, but there is no risk in trying.

Converting a legacy report is quite simple. In the Ignition Designer, open the window where the Report Viewer component exists.  If you right click on the component, the new "Convert..." option is at the top of the popup menu.  Selecting it will start the conversion process which first prompts for the "OK" to proceed, then asks what the new Report Resource should be called. 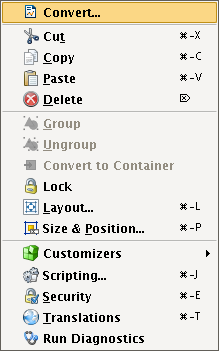 Upon conversion, a new Report Viewer will be added to the existing window in addition to the old report.  If you check the Project Browser, you'll see the new report under the Reports tree node.  Open the newly created Report Resource to make any edits, to add data sources, or add Scheduled Actions!