Logging data is easy with Tag Historian Module. Once you have a database connection, just set your Tags to store history. Ignition creates the tables, logs the data, and maintains the database. To learn how to log history for your Tags, go to Set up Tags to Log.

The first step to storing historical data is to configure Tags to report values. This is done from the History page in the Tag Editor in the Designer. The properties include a historical scan class, that will be used to check for new values. Once values surpass the specified deadband, they are reported to the history system, which then places them in the proper store and forward engine.

Additionally, the Historical Scanclass may be set to the <Evaluate On Change> option, which records every time the Tag changes value. This is useful if you wish every new value Ignition sees on the Tag.

Note: This scanclass setting will ignore the Max Time Between Records setting.

The value mode, analog or discrete, dictates the type of value that the Tag represents, and will affect how the deadband is applied to values, and how interpolation should be performed when querying. Interpolation is the method in which the Tag Historian query system generates values for a Tag when the desired time does not fall directly on a sample timestamp.

Normally Tag Historian only stores records when values change. By default, an "unlimited" amount of time can pass between records – if the value doesn't change, a new row is never inserted in the database. By modifying this setting, it is possible to specify the maximum number of scan class execution cycles that can occur before a value is recorded. Setting the value to 1, for example, would cause the Tag value to be inserted each execution, even if it has not changed. Given the amount of extra data in the database that this would lead to, it's important to only change this property when necessary.

When a Tag executes, there are two possible timestamps that can be observed: the time associated with the data, and the time that the Tag was evaluated. The first case is generally only interesting when the value is provided by an OPC server. In most cases, the time provided by OPC, which in Ignition is referred to as the "Value" time, will be very close to the system time. Some servers, however, either due to their location or how they function (history playback, for example), will provide times that are very different than the current time.

It is generally desirable to store the System time, as it is the time that the value was actually observed by the system, and it creates a uniform timeframe for all realtime data. However, in the later case, it is necessary to store the time provided by the OPC server. Using the Value timestamp source has several consequences: the system is no longer able to validate the Tag quality against the scan class' execution, and Tag value interpolation will behave differently.

The validation of the scan class execution is generally not a concern when recording historical playback data. Interpolation only occurs when the value mode is Analog, and when there is not a value for every time window. Using System time, the value is only interpolated during the last "scan class execution window", that is, one scan class timeframe before the next value. Using Value time, however, the value is interpolated for the entire time between two data points.

The Deadband, and Analog Compression

As described above, the deadband value is used differently depending on whether the Tag is configured as a Discrete Tag, or an Analog Tag. Its use with discrete values is straight forward, registered a change any time the value moves +/- the specified amount from the last stored value. With Analog Tags, however, the deadband value is used more as a compression threshold, in an algorithm similar to that employed in other Historian packages. It is a modified version of the 'Sliding Window' algorithm. Its behavior may not be immediately clear, so the following images show the process in action, comparing a raw value trend to a "compressed" trend.

In most cases, queries returned by tag history will apply some form of aggregation, as determined by the aggregation mode. However it is possible to get a "raw data query", which is a result set that contains only values that were recorded: meaning no aggregation or interpolation is applied to the results. A raw data query can be obtained by using one of the following options:

Add History to Tags in a UDT 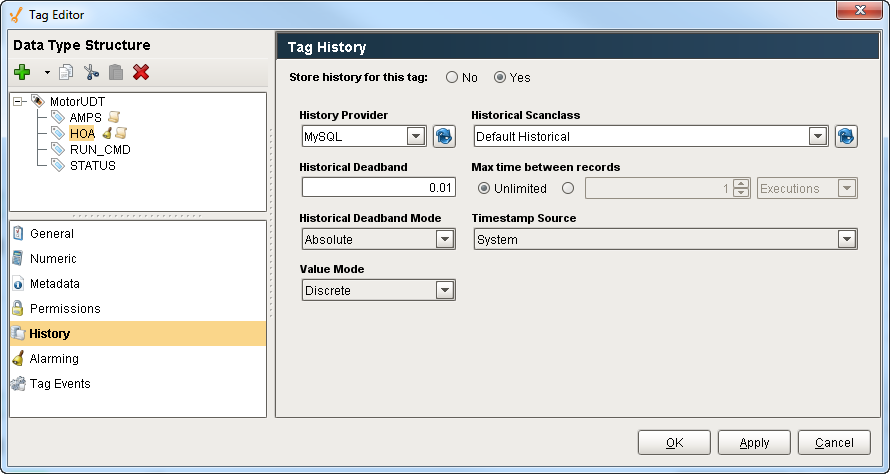 Tag History Providers are what drive the historian in Ignition. They typically require some sort of database that stores the data to be recalled at a later time in a trend or report. They are setup or configured in the Configure tab off the Gateway Webpage by going to Tags > History.

The default history provider that automatically gets created for each new database connection that gets established and will be removed if that database connection is deleted. While it can be configured to allow for some different storage options, it is setup with a 1 month partition by default.

This provider provides a link to a provider on another Gateway. To use this type of provider, there must be an established Gateway Network. It can be used just to read history values that the remote provider has logged, or it can be configured to allow the local Gateway to write values to the remote Gateway.

This provider combines two separate providers into a single new provider. When setting up a Tag to store history, selecting this provider will write the same data to both providers that it has selected. The Tag History Splitter is useful for automatically creating a backup of your data, or for reading history from two separate providers. Learn more about setting up the Tag History Splitter here.

Establishes a connection to an OPC-HDA Server to read history data that may be stored there from a third party. Ignition can't write to this type of history provider.

This requires the OPC COM module be installed.

It is important to configure your Store and Forward system when using Tag history. For more information, see the following sections: