The column selector component is conceptually similar to the Row Selector, except that instead of filtering rows, it filters columns from its output dataset. Each column from the input dataset is shown as a checkbox. As the user checks and un-checks columns, the output dataset has those columns added or removed. This is very handy for driving the Table and Classic Chart components. In addition, this component can bring in multiple datasets and output just as many filtered datasets.

Addition information on the Column Selector can be found on the Vision Reporting Components page.

This component does not have scripting functions associated with it.

This component does not have extension functions associated with it.

This event fires when the mouse enters the space over the source component.

This event fires when the mouse leaves the space over the source component.

This event fires when a mouse button is pressed down on the source component.

This event fires when a mouse button is released, if that mouse button's press happened over this component.

Fires when the mouse moves over a component after a button has been pushed.

Fires when the mouse moves over a component, but no buttons are pushed.

Fires whenever a bindable property of the source component changes. This works for standard and custom (dynamic) properties.

The Column Selector Customizer contains two basic parts. The left side of the customizer allows you to configure how many datasets can be brought in for filtering. Each dataset added will add two additional custom properties to the Column Selector; an In dataset property and an Out filtered dataset property. Datasets can also be removed here, or moved up or down in the list. If there are multiple datasets, the columns from the first dataset in the list will be displayed at the top of the Column Selector, while the columns from the last will be at the bottom. 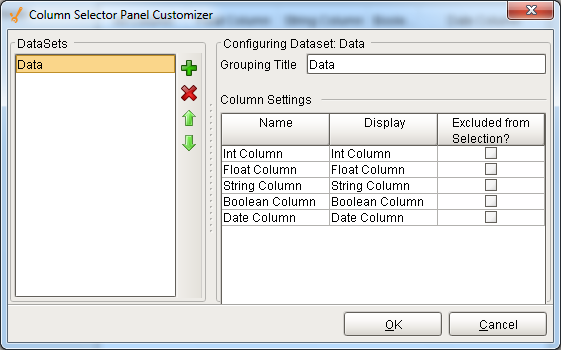 The right side of the customizer allows you to configure the settings for each dataset. When a dataset is highlighted on the left, we can see some basic information about it on the right, such as the Grouping Title and a list of all of the columns in that dataset. The Grouping Title is only used if there is more than one dataset in the Column Selector. In the component, each dataset's columns will be contained in a border and will display the Grouping Title. This can be configured to be anything, so that it is easier for a user to distinguish what each set of columns is for. In the Column Settings table, we see each one of the columns in that dataset listed out. Here, the Display column allows us to alter what name that column will display on the component, again allowing you to create names that are more meaningful to the user. Finally, the Excluded from Selection column allows you to exclude certain columns from being filtered. Columns that have this enabled will not show up in the list of columns on the component. This will not filter them out in the output dataset, but instead forces them to be in the output dataset.

Refer to the example on the  Vision Reporting Components  page.