Charts can have variables created within them. The term “scope” means a collection of named variables that are accessible to the elements of a Chart. Each chart instance gets its own, private scope. Scopes are basically free-form name-value maps, whose values may be any Python object, including scalar and multivariate types.

Each chart gets a scope object that can be accessed from all steps and transitions within that chart. When starting a chart (for example, from a script), you’ll be able to pass variables to the chart: those variables will appear in the chart’s scope.

By defining a variable as chart-scoped, all of the scripts and expressions in the chart may access the variable. Variables that will be referenced by multiple elements should be made chart-scoped.

The Begin Step of a chart allows Chart Parameters to be defined. Chart Parameters are chart-scoped variables that the Chart expects to be initialized with. Values may be defined for each parameter, but can be overridden when a Chart is called, or starts. If the parameter values are override, then the initial values will be ignored.

One of the chart parameters defined on the begin step may be marked as the Key Param. This means that this parameter may be used as an identifier for the chart. For example, suppose your chart defined the automation process for a car through an assembly line. You might define the car's VIN as the key param. This means that instances of this chart may be identified by the VIN they were started with.

As long as the name of the variable matches a pre-existing variable, then the new value will be assigned. If a script on an Action attempts to reference a variable that has not yet been defined, the script will create it.

There are a number of built-in variables maintained by the SFC engine that can be read through the chart scope.

In addition to the built-in variables above, the following names should be avoided when declaring chart or step variables:

Referencing chart-scoped variables in Transitions allows you to easily control the flow of a chart. This is commonly used to create a {counter} that blocks flow of the chart until a certain condition has been met. 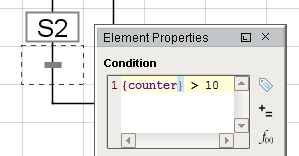 Once chart-scoped variables have been defined, their values can be viewed while the chart is running in the Chart Monitoring section. This allows for easy troubleshooting from the Designer. More details can be found on the Monitoring and Debugging Charts page. 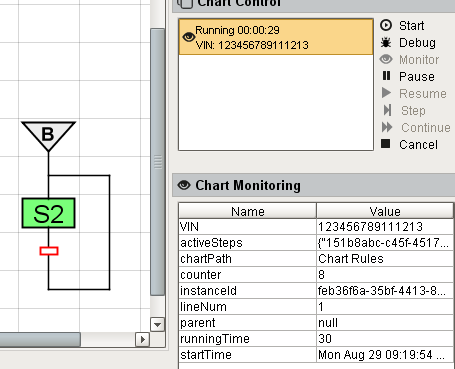